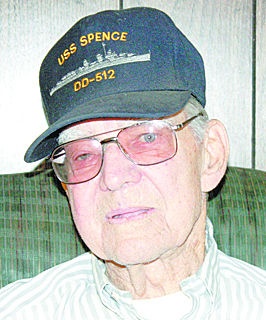 Albert A. Rosley, Jr, 90, of Eckhart, passed away on Tuesday, October 27, 2015, at the Frostburg Village Nursing Care Center.

Born on November 4, 1924 in Powhattan Point, OH, he was the son of the late Albert A. and Helen Williams Rosley.

In addition to his parents, Albert was preceded in death by his wife, Alice F. (Albright) Rosley on May 24, 2000; nine siblings and two half-brothers and was the last remaining member of his immediate family.

Albert joined the U.S. Navy, having enlisted prior to his eighteenth birthday.  He served on the destroyer USS Spence, which endured many battles in the Pacific Theater during WWII, only to be capsized during a vicious typhoon on Dec. 18, 1944, off the Philippine Islands.  He was rescued two days later, clinging to a floater net.

Following his military service, he worked as a street line foreman and retired from Columbia Gas.

A memorial service will be held at Durst Funeral Home, 57 Frost Ave, Frostburg, MD, on Saturday, October 31, 2015, at 11 am with the Rev. Stephen Durr of #365 Hospice of Altoona officiating. Family and friends will be received one hour prior to the service from 10-11 am.

Inurnment will be held at Restlawn Memorial Gardens at a later date.

To order memorial trees or send flowers to the family in memory of Albert Rosley, Jr., please visit our flower store.