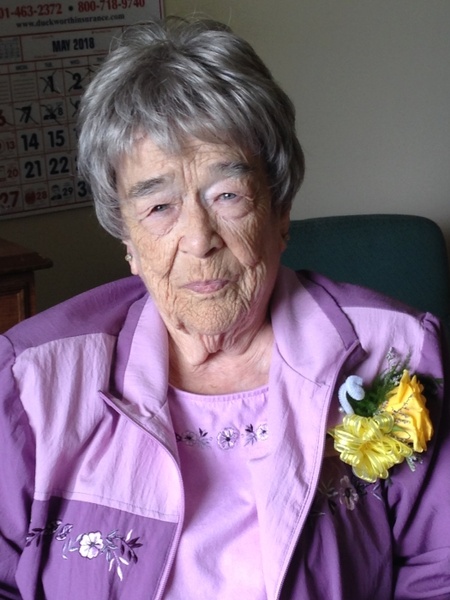 Born on October 17, 1924, in Cumberland, MD, she was the daughter of the late William T. and Margaret Ann (Richardson) Lewis.

In addition to her parents, Alice was preceded in death by her husband, William Lynn Greenwood, whom she married August 3, 1946, sharing their lives together for 70 years; son Lynn A. Greenwood; brothers, Robert, Gilbert, Thomas, Leroy, Herbert and William; sisters, Elsia, Mary and Dora; and infant great granddaughter.

She was a graduate of Allegany High School Class of 1942 and furthered her education at Catherman Business School.  Her biggest accomplishment was her poems.  She was so proud and overjoyed when her poems were published in a book and recorded in the Carnegie Library of the Blind, GIVE ME JUST ONE YELLOW ROSE.

Mrs. Greenwood was very active in the Order of Eastern Star, she was Past Matron of O.E.S. Mountain Chapter #15, Frostburg, MD, Past District Deputy in the Order of Pythian Sisters of Morningstar Temple #1, Lonaconing, MD, and was a member of the Golden Age Group, Chambersburg, PA.

Funeral services will be held at the funeral home on Thursday, September 13, 2018, at 11 am with Rev. Gary Ziegler, nephew of Mrs. Greenwood, officiating.

Interment will be in Sunset Memorial Gardens in Cumberland, MD.

We are extremely grateful for the compassion and care shown to both Alice and her family.  The family would like to thank all the staff at Western Maryland Regional Medical Center, Sterling Care Frostburg Village Nursing Home and Durst Funeral Home for the incredible care and service.  We are grateful for the love of everyone that has been in Alice’s life and her family. XOXO

To order memorial trees or send flowers to the family in memory of Alice Greenwood, please visit our flower store.