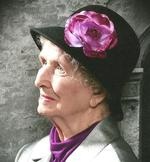 LaMont  was a loving lady who lived her faith in a meaningful way.   She loved her Savior and her church family.  She was a member of  Trinity Assembly of God, Midlothian.  She worked on the NYA, a youth work program during the depression. During WWII she worked in an ammunitions plant in Elkton, Maryland and later at the Celanese Fibres Plant and at GC Murphy's.  In reading our mother's writings she shared, "One beautiful day in August, 1956, Lewis came into Murphy's Store and asked me to go to a revival service in Westernport, which began a two month courtship, that resulted in our wedding on October 28, 1956."   LaMont and Lewis began every day with Bible reading.  She was a generous giver regularly supporting several ministries and missionaries.  She enjoyed and excelled at gardening, canning, cooking, baking, quilting and she loved to travel.  Though never wealthy by earthly standards, she was always helping her family, never missing a birthday or Christmas gift. Her gift of sharing meals with family and visitors brought her much joy.  Above all, her most precious gift was her unconditional love.  She enjoyed her life as a devoted housewife, mother, and grandmother.  She thanked God for all His blessings and His peace and goodness throughout the years.

The family would like to especially thank in-home caregivers Bonita Skidmore, Judy Hughes, Gwen Winters, and Pannell Bishop for their loving devotion to mom.  In addition, we would like to thank the loving and nurturing staff of Frostburg Village, as well as caring and watchful neighbors in Shaft.

To order memorial trees or send flowers to the family in memory of Blanche Ross, please visit our flower store.