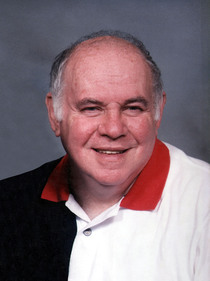 81 of Clarysville died after a long illness Thursday, December 19th at Frostburg Nursing and Rehabilitation Center.

The grandson of the late Jim and Eva Bett and son of the late Walter and Pauline Robinson, he was preceded in death by his wife and soul mate Harriet Carter Williams, his sister Patsy Kelso, his beloved aunt Genevieve Williams and three grandchildren, Stephanie, Melody, and Lauren.

Jim is also survived by many students he inspired while teaching in the Allegany County and Bedford County school systems, and in the Pennsylvania State University system.  He spent most of those years at Hyndman High School teaching Pennsylvania State, US and World History.  He also served as tennis coach and faculty adviser to the Drama Club and Prom Committees. His life touched hundreds of table tennis enthusiasts nationwide and members of St. John’s Episcopal Church where he served in many capacities.

A 1950 graduate of Allegany High School, he was a multi-sport athlete and art director of his senior yearbook.  He earned a BA in history from Frostburg State University where he played baseball, basketball, soccer and tennis. He also attained an MA in History from FSU and an M.Ed. from West Virginia University.

Although he was most proud of his family, his wife Harriet and his children, Jim lived a life of significant outside accomplishment.  He was a lifelong tournament table tennis player who won the Chevy Chase Invitational Tournament in 1948 and made the finals of a doubles category in the US Open 51 years later.  He operated the Western Maryland Table Tennis Club in various locations and competed nationally for many years in between. His sense of fair play and sportsmanship made him a popular choice as an umpire in both table tennis and tennis tournaments.

In addition to his career as an educator, Jim reached retirement age as a government markets service representative for AT&T in Rockville, MD and Oakton, VA.  After returning to Western Maryland, he became one of the Episcopal Diocese of Maryland’s first ordained Mutual Ministry Priests at age 77.

To order memorial trees or send flowers to the family in memory of Charles Williams, please visit our flower store.