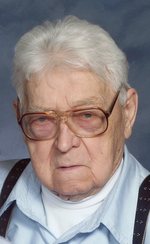 95, of Mount Savage passed away on March 13, 2013 at Frostburg Village Nursing Home.

Born November 27, 1917 in Barrelville, he is the son of the late Theodore and Julia (Radwilovicz) Abucevicz. In addition to his parents he is preceded in death by his sister, Valentina Meager; two brothers, Constintine Adam and Theodore Michael Abucevicz; and one daughter, Apryl Roach.

Chester was an elder of the Barrelville Presbyterian Church as well as the bell ringer, and a US Army Veteran of WWII D-Day and Battle of the Bulge. He held employment at the Celanese Fiber Corporation in the stone quarries while he supplied timber, then retired from Kelly Springfield Tire Corporation. He was a founding member of the Barrelville Outdoor Club, and the American Legion V.F.W. Old Rail Post #6025.

To order memorial trees or send flowers to the family in memory of Chester Abucevicz, please visit our flower store.