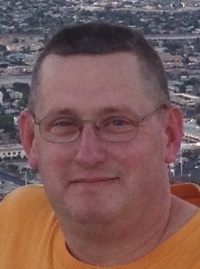 Born July, 25, 1964 in Mount Clemens, MI, to the late Laurence Brauer and Dorothy (Brown) Brauer Neville.  In addition to his parents he is preceded in death by one brother, Robert Alan Brauer.

Devlyn was a sales representative for United Natural Foods, a U.S. Air Force Veteran, and an avid automobile enthusiast.

To order memorial trees or send flowers to the family in memory of Devlyn Brauer, please visit our flower store.