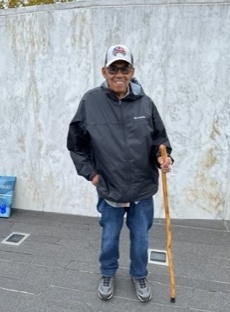 Donald W. “Donnie” Jackson, of Frostburg, went to be with the Lord on Sunday, May 8, 2022, surrounded at home by his loved ones.

Born June 13, 1942, in Frostburg, he was preceded in death by his parents, Raymond A. Jackson Jr. and Geraldine Jackson; his fraternal twin brother, Ronald Jackson; and a son, Donald “Duke” Washington Jackson Jr.

Donnie loved many things in life, but nothing more than his wife of 46 years, Dawn (Wright) Jackson, whom he is survived by.

He is also survived by his right-hand-man and son, Travis, and girlfriend Tracy Rush.

A graduate of Beall High School, Donnie was employed at Berkowitz Shirt Factory and Frostburg State University, where he retired in 2006.

Known by some as “The Old Man,” “Mayor of Green Street,” and “Big D,” Donnie was known by everyone as a genuine, caring man who could make you laugh until your face hurt.

Donnie was a sports fan through and through. He loved the Los Angeles Dodgers, dating back to when they were in Brooklyn, as well as the Baltimore Ravens, Cleveland Browns, Maryland Terrapins, and WVU.

He also played softball at Lions Park in Frostburg, where he dedicated his time to supporting local student-athletes as a fan for nearly 50 years.

Over the years, Donnie rarely missed a Beall or Mountain Ridge soccer, football, basketball, baseball or softball game. He was also a dedicated attendee of the Alhambra Catholic Invitational Tournament every year at FSU.

Loved by many, Donnie will be missed by everyone that had the pleasure of meeting him. He was a devoted family man that opened his heart to anyone that needed it. Anyone that was a friend to someone Donnie cared about was also a friend to Donnie, but he made them feel like family.

Friends and family will be received at Durst Funeral Home, 57 Frost Avenue, Frostburg, MD on Thursday, May 12, 2022, from 4 to 7 p.m. A private funeral for immediate family is being arranged.

Per Donnie’s request, family and friends are asked to wear their favorite sports team jersey or T-shirt to the viewing and/or funeral.

In lieu of flowers, the family asks for donations be made to UPMC Western Maryland Home Hospice or Bittinger Volunteer Fire Department.

To order memorial trees or send flowers to the family in memory of Donald Jackson, please visit our flower store.