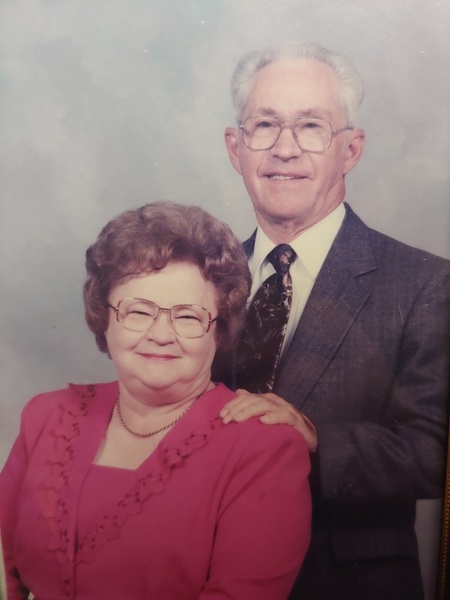 William E. Wampler, 93, of Blocher Road, Frostburg, joined his beloved wife in heaven on June 12, 2020.  Being a man of his word, Ervin promised his wife Thelma, who passed away on March 30, 2020, that he would “join her soon”. Ervin died of a broken heart that was mended at Heaven’s gate.

Ervin was born in Avilton on April 23,1927.  He was the son of Saylor and Mary (Michael) Wampler.  He was preceded in death by his brother, Danny Wampler and sister, Elvie Phenecie.  He was the last surviving member of his immediate family.

Ervin spent his childhood on the family farm raising cattle and crops with his father and brother and attending a one room school house in Avilton.

The Wampler home was a home where others loved to congregate.  Through the years of the “Great Depression”, many neighbors, friends and family gathered for a weekly Sunday dinner at the Wampler homestead.  His nickname was “Shotgun” and he loved to box.  He graduated high school at the age of 17, and with the help of his mother, joined the military and served as an American Merchant Marine in oceangoing service during the period of armed conflict, December 7, 1941 to August 15, 1945.  He spoke rarely of his military oath.  Ervin had an unwavering strength and commitment to his God, family, country and friends.

He married the love of his life Thelma (Lewis) Wampler in 1947.  Together, they raised two daughters, Kathy (Wampler) Smith and Vicky (Wampler) Resh. Together, they raised their children according to the biblical standard of God, family and service to others.  Ervin was a giver and a lover of others. Anyone who met Ervin, had an instant and lifetime friend.  He had a big garden every summer and would deliver fresh veggies to the doorstep of many Seniors and friends.  Neighbor families were often seen gathered on the Wampler front porch, enjoying the love of Ervin and Thelma.

Ervin was employed for 10 years at the Allegany Ballistics Laboratory as an explosive expert.  He eventually retired from the Kelly Springfield Tire Company, Mexico Farms in 1984, working by day and building his retirement home by night.  Ervin was an accomplished carpenter and welder.

He and his family were lifelong members of Welsh Memorial Baptist Church.  For years, Ervin taught Sunday School and served as chairman of the deacons, trustee, chairman of the Building Committee, Pastoral Selection Committee, usher and choir member.  He loved his Lord and his church.

Ervin was a member of the Brothers of the Brush, Textile Workers Union of America, International Chemical Workers Union and National Rifle Association.  He served as safety advisor, advanced CPR certified and volunteer firefighter during his career.  He saved many lives during his time here on Earth and he brought many people to the realization of God’s saving grace.

Funeral services will be conducted at the funeral home on Wednesday, June 17, 2020, at 1 pm followed by a graveside service at Frostburg Memorial Park.  Pastor Jim Jeffries and Pastor Dana Umbel will officiate.

The family would like to express their gratitude to the Garrett County Hospice staff, medical director, Dr. Miller, Tracey, Stephanie and Grace for the tender care and compassion shown to Ervin and his children during his final weeks of life.

To order memorial trees or send flowers to the family in memory of Ervin Wampler, please visit our flower store.