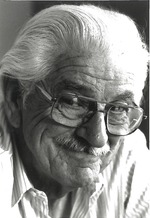 George B Taylor, 90, of Winchester Road in LaVale, passed away Tuesday, March 12, 2013 at his daughter’s home in Berkeley, California.

Born March 23, 1922, in Frostburg, Maryland, George was the son of the late George E and Maude Jenkins Taylor of Eckhart.  He was preceded in death by his wife, Betty Truly Taylor, two sisters Maud Kroll and Betty Barry of Frostburg and his brother, Robert Neal Taylor, of Winchester, Va.

Mr. Taylor served in the 30 th Infantry Division of the Army in Europe during World War II.  Returning from the war, he worked briefly at Eckhart Mines before working for many years as a tractor-trailer driver and then fleet manager for Ort’s Bakery in Cumberland.  He later worked for Lewis Ort at the Fibred Company at Mexico Farms to build a plant to scale up production of soy fiber used in diet breads.

A private interment will be in the Frostburg Memorial Park.

Memorial contributions may be made to the American Heart Association, 4217 Park Place Court, Glen Allen, Virginia, 23060-9979 or on line at www.americanheart.org .

To order memorial trees or send flowers to the family in memory of George Taylor, please visit our flower store.