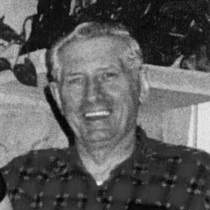 Born February 18, 1927 in Zihlman, he was the son of the late George Henry and Rose (Porter) Donius. He was preceded in death by six sisters, one brother and a grandson, Jeremy Donius. He was the last surviving member of his family.

"Pete" as he was better known, attended Beall High School and received his GED in 1986. He entered the US Army in April, 1945, served in Okinawa as an MP and was discharged in December 1946. Pete worked for Kaiser Refractories in Zihlman for 36 years and retired when the plant closed in 1980. A talented Do-It-Yourselfer, he not only built his first house in Zihlman in 1951 but also became a stonemason building an outdoor fireplace, an inside oven cabinet and covering his garage from stone garnered from nearby fields. He was the consummate house husband from the time of his retirement on, turning out his unparalleled beef stroganoff and chicken cordon blue. He was a strong positive influence on his six grandchildren and adored his ten great grandchildren. He also was an accomplished gardener and mushroom hunter.

To order memorial trees or send flowers to the family in memory of George Donius, please visit our flower store.