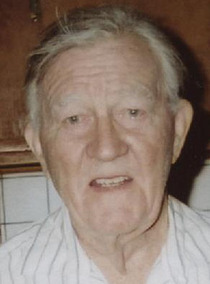 Born November 12, 1918 in Youngstown, OH; he was the son of the late Charles and Anna B. (Cronin) Porter. He was preceded in death by his parents, two brothers, Frances Porter and William Porter, and one sister, Ella Cronin.

George was a member of St. Michaels Church and The Holy Name Sodality, a member of the Knights of Columbus, Frostburg Elks, Eagles, Farrady Post#24 American Legion in Frostburg, MD served on the Honor Guard, Mount Savage V.F.W. (Old Rail Post). He was a WWII Private Army Veteran serving in Columbia Air Base, 82nd Airborne Division.

George was formerly employed in the Coning Department at Celanese plant in Cumberland for 45 years and C.E.T.A. Program in the old Post Office and the Board of Education in Cumberland, MD as a custodian for a short time.

In his younger years, George helped with club projects, making flag holders on Main Street, poster boards, as a locksmith made keys for the clubs. He also helped with projects at St. Michaels Church such as putting gates in front of the alter and painting the church with Jody Tippen. He held traffic at the intersection of Frost and Broadway Streets for many funerals over the years. He helped his cousin at the Palace Theater in Frostburg, working in the movie projector room putting on movie reals. In his spare time, he would work in his basement workshop, he was a handyman fixing radios and anything needing fixed. George liked to walk out to town visiting the clubs and stores, he was a friendly man always giving a helping hand to anyone in need.

He is survived by a sister, Mary C. Whiteman, Lonaconing, a niece, Peggy Whiteman, who was like a daughter to him and his caregiver, and her fiancé Frank Danfelt of Tomahawk, WV, niece, Joann Cook, Ohio, and nephew, Bill Porter, PA and several other nieces and nephews, great nieces and great nephews; cousins in California, the Spates family and Andrea Bowden in Baltimore, close friends Viola Ruch and family in St. Louis, MO, and Bob Footen.

To order memorial trees or send flowers to the family in memory of Geroge Porter, please visit our flower store.