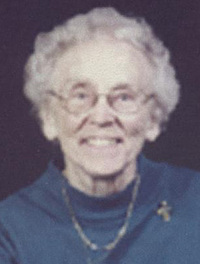 She was born April 7, 1923, in Nanty Glo, PA, daughter of the late Thomas and Lilly May Price. She graduated from Nanty Glo High School and Cambria Rowe Business College, Johnstown, PA. She worked for the Closed Bank Division, Ebensburg, PA. She enlisted in the Women Marine Corps W.R. in 1943 and served two years, being stationed at Parris Island, SC, in the Motor Transport in World War II. She worked for the Pennsylvania Dept of Highways in Ebensburg, PA as a Fiscal Clerk. She retired from the Lewis J. Ort Library, Frostburg State University, Frostburg, MD, having worked there for 17 years as an Account Clerk.

To order memorial trees or send flowers to the family in memory of Gwendolyn Gillis, please visit our flower store.