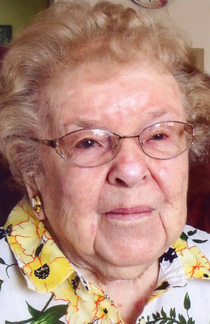 Born March 22, 1910, in Brooklyn, NY, she was the daughter of the late Henry Wittich and Lena (Kamp) Wittich.  In addition to her parents, she was preceded in death by her husband, Paul Charles Bernhard in 1968 and sisters, Florence Rain and Leona Dibble.

Henrietta worked as a secretary in New York City for fourteen years.  After the birth of her sons, she moved to East Northport, Long Island where she worked twenty more years as secretary to the Principal of Northport High School.

After retirement, she moved to Whiting, NJ, to a retirement area called Crestwood Village. She joined and became active in the Community Reformed Church of Whiting.

After twenty years, she moved to Frostburg, MD, to be near her son, Stephen. She lived in Frostburg Heights Apartments from January, 2003 to March 2013, where she found everyone very friendly and made many new friends.

She travelled extensively both in the United States and Europe.

In accordance with her wishes, Henrietta was cremated.

To order memorial trees or send flowers to the family in memory of Henrietta Bernhard, please visit our flower store.