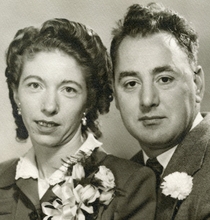 95, of Frostburg passed away on Friday, March 13, 2015, at the Frostburg Nursing and Rehab Center.

Born on March 24, 1919, in Garrett County, she was the daughter of the late Harry and Eliza Rosenberger.   In addition to her parents, she is preceded in death by her husband, Albert R. Via; son, Michael E. Via; and granddaughter, Valerie Anne Via.

Mrs. Via was a member of Seventh Day Adventist Church and previously worked at the Celanese. She loved to bake bread and pies and was an avid gardener.

Family and friends will be received at Durst Funeral Home, 57 Frost Avenue, Frostburg on Monday, March 16, 2015 from 12 to 2 pm.  Funeral services will be held following the viewing at 2 pm with Pastor Scott Shafer officiating.

Interment will be in Emmanuel United Methodist Cemetery, Rt. 40 west of Frostburg.

To order memorial trees or send flowers to the family in memory of Iva Via, please visit our flower store.