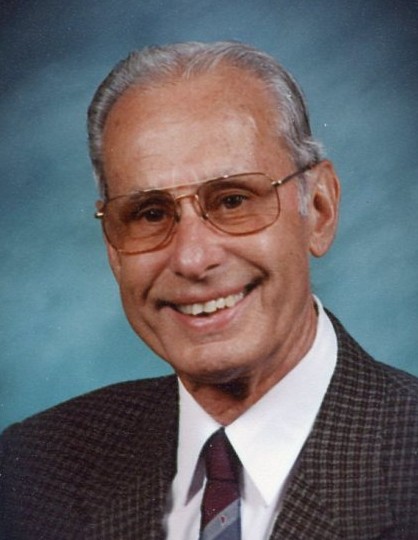 Jack was the son of Herbert M. Armstrong, Sr. and Elizabeth Hutson Armstrong. “Mike” and Elizabeth were the proprietors of H.M. Armstrong & Company, better known as the Armstrong General Store. The family lived above the store, where gas and groceries (and penny candy) were always available seven days a week. Jack graduated from Allegany High School in 1944, where he played football and basketball. After attending Potomac State, Jack enlisted in the Navy “for the duration.” He was discharged in July of 1946 after serving in Bainbridge and aboard the USS Midway. He completed his studies at Potomac State, and graduated from the University of Maryland College Park, compliments of the GI Bill, with a degree in Mathematics Education.

In 1949 he married Ruth Lee Eichhorn, of Lonaconing, and began his 25 year teaching career at Beall High School. In 1954, as treasurer at Beall, one of his tasks was to make deposits at the Fidelity Bank. It was at the bank, by chance, that he met Mr. Phil Master, a representative of The Erie Insurance Group. The Erie was looking to expand in Maryland, so in 1954, Jack became an insurance agent. On a small teacher's salary, and with a new home and two small children, Jack's goal was that income from the Armstrong Insurance Agency would eventually pay his mortgage of $75.00 per month. Ruth, by day, and Jack, in the evenings, nurtured the business from a desk in their home. After retiring from the Board of Education in 1974, Ruth and Jack managed the business until 2005, when the Agency was sold to his daughter-in-law, Barbara Armstrong, and his nephew, David Llewellyn.

Jack was a numbers guy. He could recite customer policy numbers, enjoyed his trips to Las Vegas and the Rocky Gap Casino, and loved tough Sudoku challenges. Jack was a long-time member of Maplehurst Country Club where his weekly golfing foursomes payed ten cents a par and a quarter for birdies into their “Dinner with the Wives Fund.” He bowled in the Frostburg City League for over 50 years, and in the Blough Memorial League for over 60 years.

His love for the Pittsburgh Pirates began when listening to games on the radio and keeping score while growing up. He celebrated his 90th birthday in July with his family at PNC Park, where he witnessed first-hand a Bucco Victory. Jack was a member of the Frostburg Post 24  American Legion and a life member of the Frostburg Elks #470.

He was particularly proud of his daughter, Robin Townsend, a retired teacher/principal/current coordinator of teacher education at McDaniel College, and her deceased husband/thoroughbred horse trainer Donald; his son, John “Slug” Armstrong, a retired teacher/counselor/coach/accomplished golfer, and his wife, Barb; his grandson, John C. Armstrong, a Baltimore attorney, and his friend Anne Mettam; and his granddaughter, Rachel E. Armstrong, a research chemist in Eindhoven, Netherlands, and her friend Keith Searles.

Jack would be delighted if friends would send a note to his wife of 68 years, Ruth Lee Armstrong; expressions of sympathy can be directed to his favorite cause, the dedicated volunteers of the Frostburg Fire Department, or to his beloved St. Paul's Lutheran Church, Frostburg.

Friends are invited to visit the family at Durst Funeral Home, Frost Avenue, on Tuesday, February 20 from 2-4 and 7-9 PM. Services will be held at 11:00 AM on Wednesday, February 21 at Durst Funeral Home. A private family interment will be held at a later time at Frostburg Memorial Park, with military honors presented by the Frostburg American Legion.

To order memorial trees or send flowers to the family in memory of John Armstrong, please visit our flower store.