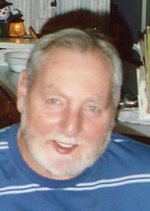 Joseph “Francis” Haupt, Jr., 74, of Zihlman, went to be with the Lord from his home after a courageous 18 year battle with Parkinson’s disease on Wednesday, March 27, 2013.

He was born January, 2 1939 in Frostburg to Beatrice Passarell Haupt and the late Joseph Francis Haupt Sr.

Family would like to give special thanks to Caregiver Melissa Robison.

To order memorial trees or send flowers to the family in memory of Joseph Haupt, Jr., please visit our flower store.