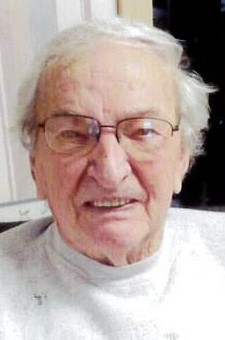 Born on August 3, 1925, in Gilmore, he was the son of the late Joseph and Nellie (McGowan) Mills.

In addition to his parents, Joe was preceded in death by his brother Regis Mills and sisters, Mary Jo Barclay Wilmoth and Bernadette Murphy.

Following graduation from high school, Joe enlisted in the Army where he proudly served our country during World War II.  He fought heroically for his country, storming the beaches of Normandy with the British.  Thankfully, Joe survived his tour of duty and returned to Maryland where he lived the rest of his life.

Prior to Joe’s deployment to Europe, he met his future wife Betty Taccino on a blind date at the Oriole Club in Midland with Harry and Mary (Russell) Devlin.  They eventually married on July 29, 1950, and remained married for these past 68 years until Joe’s passing.

Following his discharge from the military, Joe proceeded to work for the Kelly Springfield Tire Company for 32 years until he retired to enjoy his glory years and whip his weight in wildcats.   Joe enjoyed being outdoors, hunting, fishing, gardening, tending to his various dogs throughout the years and rooting for the University of Wisconsin Badgers and the Green Bay Packers.  Joe also enjoyed tinkering around with his Triumph TR3, watching car shows and sitting on his porch chatting with neighbors.

A Funeral Mass will be held at Devine Mercy Parish St. Michael’s Catholic Church, 44 E. Main Street, Frostburg, on Saturday, September 1, 2018, at 10 am with Father Ed Hendricks serving as celebrant.

Joe always had a smile on his face and was always upbeat. He enjoyed spending holidays and gatherings with the extended Mills and Taccino families and the Devlin clan and will be greatly missed by friends, family and extended family.

To order memorial trees or send flowers to the family in memory of Joseph Mills, please visit our flower store.