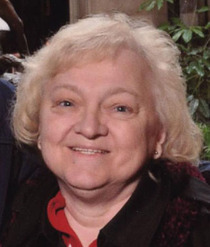 Born June 13, 1951 in Avilton, she is the daughter of the late Forrest W. and Genevive (Dickel) Railey.  In addition to her parents, she is preceded in death by a sister, Donna Rosenberger.

Joyce had held employment with Allegany Co. Housing Authority and the Hilltop Fruit Market.  She was very active with volunteer work involving the Greater Federation of Women’s Club (GFWC), where she was currently the Presidents Assistant till her term end in 2016, and had also volunteered with the Boy Scouts of America.

A funeral mass will be held at St. Michaels Catholic Church, Frostburg, on Saturday, April 26, 2013 at 11 am with Father Gregory Brown OFM Cap. as celebrant. Friends will be received one hour prior to the service at the funeral home from 10 to 11 am.

Interment will be held in Frostburg Memorial Park.

In lieu of flowers memorial contributions in Joyce’s honor can be made towards, The American Cancer Society, 1050 East Industrial Blvd Unit 3, Cumberland, MD 21502.
To order memorial trees or send flowers to the family in memory of Joyce Race, please visit our flower store.