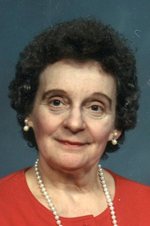 Kitty graduated from Berlin Brothersvalley High School in 1947 and Uniontown Hospital School of Nursing in 1950.  She practiced her profession at Meyersdale Community Hospital, Coatesville Hospital and Somerset State Hospital, as well as in several homes as a private duty nurse.  She was a very generous and patriotic lady and instilled this generosity and patriotism upon her family.  The motto she lived by was “God, Country and Fellow Man.”  She took much pride in the programs that honored Veterans on Memorial and Veterans Day at Frostburg Heights Apartments where she lived from February 2000, until September 2011.

Friends and Family will be received at Durst Funeral Home P.A. 57 Frost Ave, Frostburg on Tuesday, February 26, 2013 from 1 to 3 pm and 7 to 9 pm. Farrady Unit Post 24 American Legion Auxiliary will hold a service at 7:30 pm and a 8 pm service for Mt. Chapter #15 Order of the Eastern Star

Funeral Mass of Christian Burial will be held at St. Michaels Catholic Church, Frostburg, on Wednesday, February 27, 2013 at 11 am with Fr. Ed Hendricks as celebrant with Rev. Gary Cannon giving the eulogy.

A gathering of Kitty’s friends will be held immediately following the Mass at the St. Michaels Hall for a luncheon.

The family would like to thank the staff of the Frostburg Nursing and Rehabilitation Center for the compassionate and loving care given to Kitty while she was a resident.

Interment will be held at the Berlin, PA, I.O.O.F Cemetery.

To order memorial trees or send flowers to the family in memory of Kathryn Brown, please visit our flower store.