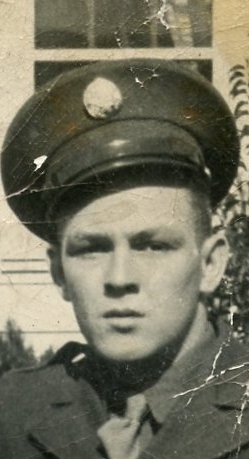 Born on August 17, 1927 to the late Marshall and Anna Mae (Bridges) Logsdon.  He was also preceded in death by his sister, Marcella Logsdon Aldridge.

In addition to his wife he is survived by his daughter, Carolyn Martin and husband Marlin; daughter, Kathy Flickinger and husband Daryl; son and best friend, Jim Logsdon and significant other, Korena Kaisne.

Also surviving is a brother, Pat Logsdon, and his sisters, Helen Uncapher and husband Bob, Joan Clauson and husband Bill, sister-in-law, Kathleen Watkins and nephew Ira Watkins, and several other nieces and nephews.

In 1945 as an 18 year old man, Ken joined the United States Army proudly serving his country during World War II as a Master Sergeant stationed in Budigen, Germany, with the HQTRP 68th Constabulary Squadron. Ken had a combination of 40 years of work for Western Maryland Railroad and the B&O Railroad.

He was a member of the Farrady Post 24 American Legion, Frostburg, and the Mount Savage VFW 6025.  He was one of the founding members of the Evergreen Hunting Club, and a charter member of the Barrelville Outdoor Club and Piney Mountain Sportsman Club.

Our Dad, Pop, Poppy was a simple man, one of the “Greatest Generation”, and we have been so blessed to have him to call ours! Our Hearts are broken.

There will be no visitation and services will be held privately at a later date.  In Lieu of flowers, the family requests donations be made to St. Jude Children’s Hospital, P.O. Box 50, Memphis, TN.

To order memorial trees or send flowers to the family in memory of Louis Logsdon, please visit our flower store.