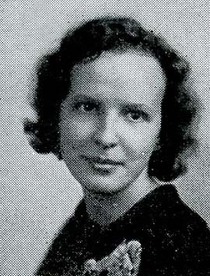 Ms. Meek attended Hill St. School, Frostburg, from grades 1-6 and went on to Beall Junior & Senior High school when it was located on College Ave, Frostburg.  In 1937, she attend Frostburg State Teachers College and graduated in 1941. She started teaching in a one-room school with eight grades at Green Ridge School, Little Orleans, MD.   From 1943 to 1954, Martha taught at East Side School, Cumberland, one year with the Special Education Class and the remaining years with 2 nd grade.  In 1954 to 1955, Martha attended Scarrett College for Christian Workers in Nashville, Tennessee.  From 1955-60, she was accepted as a missionary in Japan. During that time from 1955-57, Martha studied at Tokyo School of the Japanese Language. From 1957-1960, she taught at Tsuyazaki Machi Munakata Geen in Fukuoka Ken, Japan.  She returned to the USA in 1960 and studied at Wesley Seminary in Washington. D.C.   Ms. Meek returned to Japan in 1961 to 1966, where she continued as a Methodist missionary at Tsuyazaki Chubua Church, in Fukuoka City.  In July of 1966, she returned home to teach 1 st grade at Penn Ave. School, Cumberland, until 1979 when the new South Penn School opened She taught 1 st grade there until her retirement on July 1, 1981.

In accordance with her wishes, Martha donated her body to Science with the Maryland State Anatomy Board.

To order memorial trees or send flowers to the family in memory of Martha Meek, please visit our flower store.