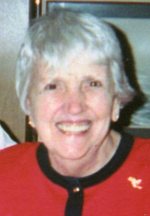 Mary (Shuey) Layman , 93, passed away at the Egle Nursing and Rehab Center on Thursday, February 28, 2013.  At the request of the family, no service will be held at this time. Mary will be laid to rest beside her husband of 69 years in a private ceremony at Frostburg Memorial Park. The family will celebrate Mary’s life in a ceremony to be held later in the year.

Mary was born in Cuyahoga Falls, Ohio on 20 September 1919 to William Valentine and Pearl “Bush” Shuey. Her family moved to Frostburg in 1931 and she lived here for the remainder of her life. Mary met her husband, Ralph Layman, while working at the “Old Colonial Inn” in Garrett County in 1940 and they were married on the 25 th of June 1943. Mary was an active member of the Frostburg United Methodist Church, teaching Sunday school for over 30 years until her declining health no longer allowed it.  She will be remembered for her happy and friendly disposition. She was employed at Prichard’s Hardware in Frostburg from the late 1960s until she retired in the 1980s. Her smiling face was the first thing you saw as you entered the store. She also was frequently seen having lunch with her sister, Doris Williams, in the first booth at the Princess Restaurant.

Mary’s interests included music, reading and working crossword puzzles. She was the family historian and photographer. After Mary and Ralph retired, they enjoyed traveling with friends and spent many happy times at the beach in and around Wildwood, NJ.

Declining health necessitated that Mary and Ralph move to the Egle Nursing home in 2007. Fortunately they were able to spend the remainder of their lives together at the home.

In lieu of flowers, please make donations to the Alzheimer’s Charity of your choice.

Condolences may be sent to the family at durstfuneralhome.com .

To order memorial trees or send flowers to the family in memory of Mary Layman, please visit our flower store.