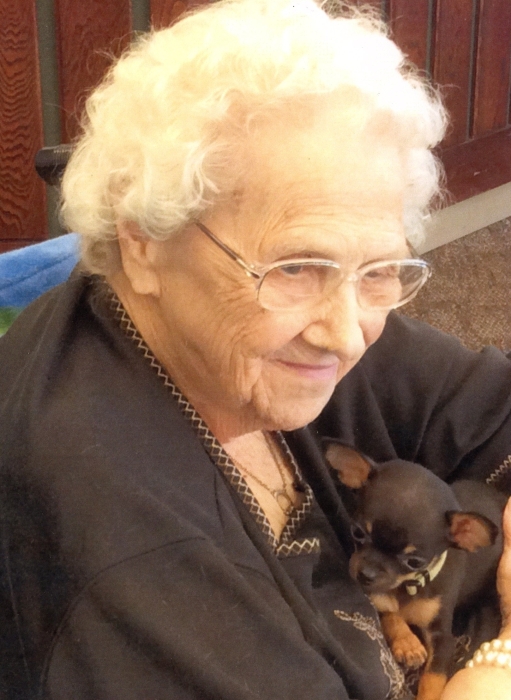 Born June 30, 1917, in Ohio, Middie was the daughter of the late John P. Tighe and Marguerite (Geis) Tighe.  Mildred was preceded in death by her parents, her husband, Joe D. Coakley, and sister-in-law, Thelma Tighe.

Middie, a name she was known by to many, was a wonderful mother, grandmother, great-grandmother, sister and friend.  She was a graduate of Beall High School, class of 1935, and attended Catherman’s Business School.  She worked at various Frostburg merchants and retired from W.T. Grant in 1974.  Mildred held the treasurer’s position with the Beall High Alumni Association at one time, as well as being the secretary of the American Legion Auxiliary Faraday Post 24 where she was a long-time member. She was also a member of the Salem United Church of Christ.  If you truly knew this wonderful lady, you knew she was very outspoken, but that she was very warm and loving once you got to know her.

On June 30, 2017, Middie celebrated her 100th birthday in style with her family, friends and the FNRC residents.  She was wearing her favorite color, purple, and was crowned with a tiara presented to her by her great-granddaughters.  She was also serenaded by Ricky Howsare.  It was a wonderful day and she truly enjoyed herself.

Family and friends will be received at Durst Funeral Home, 57 Frost Avenue, Frostburg, MD, on Wednesday, October 4, 2017 from 2 to 6 pm.

Funeral services will be held at the funeral home on Thursday, October 5, 2017 at 11 am with the Rev. Diane Smith officiating.

In lieu of flowers, the family requests donations be made to Salem United Church of Christ, 78 S. Broadway Street, Frostburg, MD 21532.

To order memorial trees or send flowers to the family in memory of Mildred Coakley, please visit our flower store.