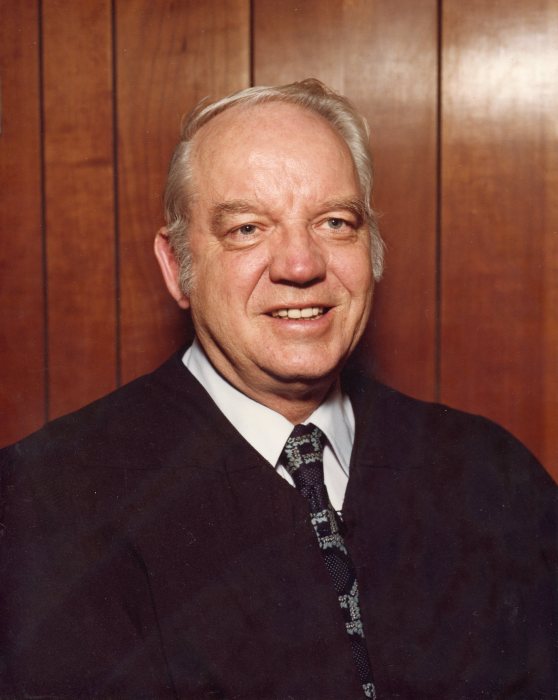 Judge Bowen was born August 9, 1924, in Zihlman, to William Anthony Bowen and Mary Elizabeth (Miller) Bowen.  He and his wife, the former Phyllis M. Lydinger of Cumberland, retired and lived in Fort Pierce, FL.  Judge Bowen’s first wife, Ruth Margaret (Shewbridge) Bowen of Lonaconing, was killed in a traffic accident in 1981.

Miller attended LaSalle Institute and graduated from Beall High School in 1942.  He signed up for pilot training in World War II when the Army Air Corps recruiter visited the Frostburg State College campus.  During the war, he flew 27 missions in B-24 bombers in the Rhineland, Central Europe, and Ardennes battles and campaigns in which he earned 3 Bronze Stars and an Air Metal.

He passed the Maryland bar examination in July 1951 and for the next four years worked with the Federal Bureau of Investigation as a special agent in Kansas City, New Orleans, and Washington, D.C.  From 1955 to 1959, Miller worked as a trial attorney in the chief counsel’s office of the Internal Revenue Service.

He practiced law in Cumberland with the firm of Anderson and Bowen from 1959 until his appointment to the District Court bench in May 1971.  He was one of the original 79 appointees selected by then Governor Marvin Mandel to serve in the 12 district courts throughout the state.  He was reappointed to a second 10 year term by the then Governor Harry Hughes.  Judge Bowen retired from the court system in 1987.

Judge Bowen was very active in the community including serving as past president of the Allegany County Bar Association, past potentate of Ali Ghan Shrine and past director of the Shrine Jesters.  He was a member of the Masons, Scottish Rite, Frostburg Elks, Cumberland Moose, Frostburg American Legion, Cresaptown Amvets, and the Cumberland Veterans of Foreign Wars.

Goose enjoyed reading, jokes and puns, golfing (until recently), history, ancestry, family, and friends.  He will be remembered for his keen wit and humor, sense of fairness to all, his willingness to help others, and his contentment in seeing other succeed.

In accordance with his wishes, Miller will be cremated.

A celebration of life will be held Sunday, September 13, 2015 at 1:00 pm at Durst Funeral Home, Frostburg. Following the service a light social will be held at the Cumberland Country Club. The family requests in lieu of flowers memorial donations be directed to the Allegany County League of Crippled Children, 12501 Willowbrook Rd, Cumberland, MD 21502 or to WMHS Frostburg Nursing and Rehabilitation Center/ WMHS Foundation, P.O. Box 539, Cumberland, MD 21502

To order memorial trees or send flowers to the family in memory of Miller "Goose" Bowen, please visit our flower store.