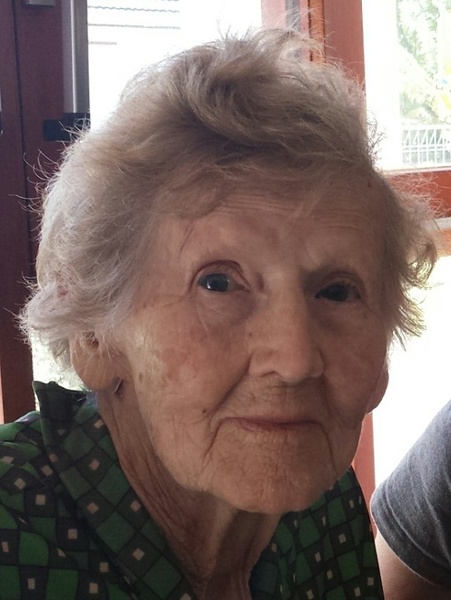 Rena Maria Gardiner (nee Wessels) of Hermanus, South Africa passed away peacefully at her home on Thursday, July 14, 2016 at the age of 95.  She was born on June 7, 1921 in Rustenburg, South Africa, only daughter of Daniel and Laura Wessels.  She was predeceased by her parents, her husband, Dr. John Gardiner, and by her only sibling Dr. Willem Wessels.

She was a graduate of Rustenburg High School and Stellenbosch University and was an elementary school teacher for almost 30 years in South Africa and Livingstone, Zambia.  She had an adventurous spirit and willingly followed John in his surgical career and studies to Liverpool, England, to Johannesburg, South Africa, to Livingstone, Zambia, to Cape Town, South Africa, and to Nongoma, Zululand.  Finally she and John retired to Hermanus, South Africa.  She always spoke of her sports and hobbies (tennis, golf, and bridge) as being social passports and passed along her love of at least tennis and bridge to her four children.  She also loved gardening and canework; making hundreds of cane tea trays until her arthritic hands would make no more.  She loved flower arranging and won many competitions at the agricultural fair in Livingstone.  She loved traveling and visited every continent except Antarctica.  She spoke especially of her trip to Egypt, Israel, and the Holy Lands.  She also visited Nepal, Sri Lanka, Thailand, Japan, and Peru (Machu Pichu).  But she and John visited Europe multiple times including visits to her 2 sons in England and going to see Wimbledon.  They also visited their daughter in the USA and on one trip did the “senior tennis circuit” playing tournaments in Delaware, Pennsylvania, Nebraska, California, and Oregon; always making friends along the way.

In their retirement in Hermanus, she and John were very active as members of the tennis club; with Rena also a member of the Hermanus Golf Club and the Hermanus Duplicate Bridge Club.  She was proud of her frequent wins at bridge; or “firsts” as she called them.

She is survived by her four children - daughter, Laura (and husband Dr. John Gardiner) of Cape Town, SA; her son John (and wife Lois) of London, England; her daughter Marina (and husband Woody Getz) of Frostburg, MD; her son Dan (and friend Helen) of Bristol, England.  She is also survived by 6 grandchildren:  Louise, John Joseph, Kirsten, Susannah, Alexandra, and Louis.  And one great-grandson, Crosby.

A memorial service will be held at Rena’s home at Berg ’n See retirement village in Hermanus on Friday, July 22nd at 3 PM with Pastor Nel officiating.  A reception to follow at the Clubhouse.

To order memorial trees or send flowers to the family in memory of Rena Gardiner, please visit our flower store.