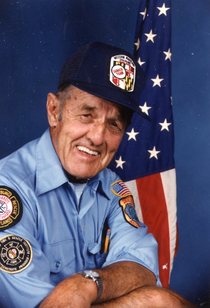 On Sunday, July 13, 2014, Richard “Dick” Fuller, 90, left behind the constraints his earthly body had placed on him and soared to Heaven into God’s and his loved one’s arms at WMHS Frostburg Nursing & Rehab Center surrounded by his loving family.

In addition to his parents, he was preceded in death by his wife Bronwen (Rupp) Fuller, son Richard, granddaughter Bethaney, brother Harry Fuller and nephew Harry Fuller, Jr.

He was a bricklayer by trade and worked out the Bricklayers Local Union.  He had also worked at ABL in the Powder Department.

Richard served his country in WWII in the U.S. Navy as a gunners mate on board the USS Murphy, participating in the D Day invasion.

He later served his community as a volunteer with the Frostburg Area Ambulance Service and the Frostburg Fire Department, where he loved going to the elementary schools teaching the Hug-A-Tree program and fire safety. He was a member of the Crime Search Team and was also a member of the Civil Air Patrol and loved flying.  As a young man, he was also in the Amateur Boxing Club.  He took art lessons and became an accomplished artist.

He is survived by his two daughters Marsha Ketterman and husband Rick of Short Gap, WV, and Renee RuppenKamp and husband Doug of Cumberland and the apple of his eye, his granddaughter Sarah Fuller of Frostburg, MD

To order memorial trees or send flowers to the family in memory of Richard Fuller, please visit our flower store.