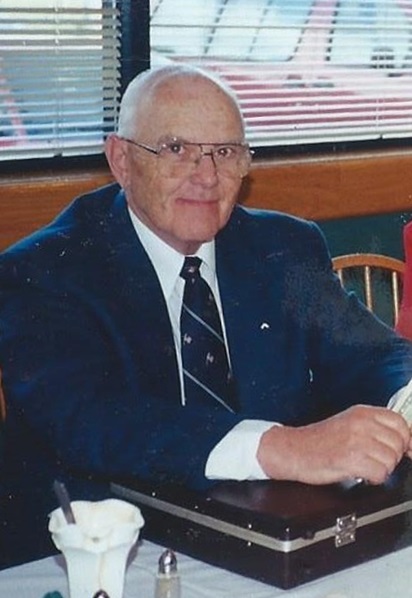 He is survived by his wife of 63 years, Betty Cran Luger and his daughters, Nancy Jeffries and husband, Randy of Euclid, OH and Brenda Luger of Frostburg.  Richard is also survived by grandson, David Jeffries and wife Anna of Gahanna, OH.

Richard graduated from New York University in 1950 with a B.S. in Accounting and also completed coursework at Rutgers University and Michigan State University.  He was employed by Union Carbide Corporation as assistant manager of the Treasurer’s Department after which he worked as financial advisor and partner with County Welding Products in New York.  In 1976, he and Betty moved to Cumberland where he joined Wilson Welding Supply Co. as vice president of finance.

A 60-year Master Mason, Richard was Past Master and Past District Deputy Grand Master of the Grand Lodge of N.Y. He was also Chaplain Emeritus of Mountain Lodge #99, Frostburg.

Since 1995, Richard served as a lay preacher in churches throughout the tri-state area.  He served the Barrelville Presbyterian church as its lay preacher since 2003.  An active member of the First Presbyterian Church, Cumberland, he was a ruling elder of that church and served as Treasurer for many years.

During his years in the Cumberland area, Richard served as president of the Kiwanis Club of Western Allegany, as secretary of the Antique Bowling League at the Bowler and as chairman of a March of Dimes walk.

A memorial service will be held on Sunday, April 10, 2016, at 2 p.m. at the First Presbyterian Church of Cumberland with Rev. Thomas Morgan and Rev. Caroline Kelly officiating.  A reception will follow the memorial service.

In lieu of flowers, the family asks that memorial donations in Richard’s name can be made to the Barrelville Presbyterian Church, P.O. Box 194, Corriganville, MD 21524.

To order memorial trees or send flowers to the family in memory of Richard Luger, please visit our flower store.