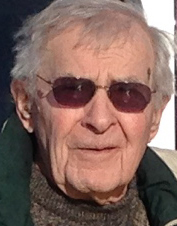 85, formerly of Frostburg, passed away on Saturday, February 14, 2015, at the home of his daughter at Cheat Lake, WV.

In addition to his parents, he was preceded in death by his sisters, Ruth and Helen and brothers, Paul and Wayne.

Richard was a U.S. Navy veteran serving during the Korean Conflict from 1949 -1952. Following discharge from the military, he worked for the Yard Department at PPG Industries until his retirement.

He was a member of Salem United Church of Christ in Frostburg.  Dick enjoyed working with his hands and enjoyed computers, woodworking and working in the garden.  He was an avid golfer, having scored 3 hole-in-ones, loved bowling, music, cars and motorcycles and spending time with friends.  He always enjoyed lending a helping hand where needed.

Family and friends will be received at Durst Funeral Home, 57 Frost Avenue, Frostburg, on Thursday, February 19, 2015 from 4-7 pm.

Funeral services will be held at the funeral home on Friday, February 20, 2015 at 4 pm with Rev. George Harpold officiating. Family will receive visitors one hour prior to the service. Military honors will be accorded by Farrady Post 24 American Legion Honor Guard.

In lieu of flowers, the family requests donations, in Dick’s name to the Salvation Army, Wounded Warrior Project or Ruby Memorial.

The family would like to thank: the dedicated professionals of WVU Healthcare; Ruth Gibson, home health care giver; Interim Home Health Care; and friends and family for their exceptional care and concern as Dick and family made this journey through life.

To order memorial trees or send flowers to the family in memory of Richard Robertson, please visit our flower store.