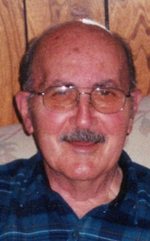 Born September 10, 1934 in Sunnyside to his parents, George Bridges and Elizabeth (Meyers) Bridges. He is preceded in death by his parents; sisters, Elsie Moore and Mary Culley; brothers, George “Buck” Bridges, Ronnie Bridges, and Warren Bridges.

Mr. Bridges was a member of the first graduating class of the new Mt. Savage School in 1953. He was employed at Elsie and Bill Moore’s dairy farm, Bethlehem Steel in Baltimore, Prichard’s Hardware Store in Frostburg, Kaiser Refractories, Pinkerton Security, and Stephen Shade, from which he retired.

He was an active member of Jehovah’s Witnesses from the age of 16, until the effects of Parkinson’s Disease made it impossible. Bridgie was a quiet, compassionate man, with a great love for family and animals, particularly cats, his last two being Tasha and Ashes. He had a great sense of humor and loved “The Three Stooges.” He was well-read and knew something about everything; he was a wealth of knowledge.

Bridgie spent his last three years as a third-floor resident of the Allegany Health Nursing Center, where he received excellent care and attention. The Mountainview Terrace staff is a group of very special people who treat their patients with love and respect. We will be forever grateful to the nurses, nursing assistants, med techs, and administration for the exceptional care provided. Special thanks go out to Thiem, Viki, and Fish, his aides who became like family, and to Maxine, whose daily greetings and chats made each visit easier. We could not have asked for any better support.

In accordance with his wishes, he donated his body to science and was cremated.

To order memorial trees or send flowers to the family in memory of Robert Bridges, please visit our flower store.