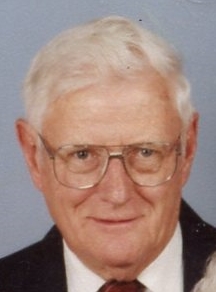 Born on February 1, 1928 in Ridgeley WV, to the late Albert J. and Mary V. (Bobo) Eckard. He was preceded in death by parents, a brother Jehu Eckard and two sisters, Amelia League and Dixie Lee Arnold.

Mr. Eckard was a member of Eckhart Baptist Church where he was a Deacon, Sunday School Teacher and Trustee.  He was a manager of A&P Grocery Stores in Frostburg, Westernport, LaVale and Hancock.  He then retired after 41 years of service and went to work for Jim’s IGA in Bel Air, MD.  Robert served in the U.S. Army in 1950 – 1952 during the Korean Conflict.

Funeral services will be held at Eckhart Baptist Church on Wednesday, January 20, 2016 at 11 am with Rev. Matt Eichorn officiating.  The family will be receiving friends one hour prior to the service from 10 to 11 am.

Interment will be in Sunset Memorial Park at a later date.

To order memorial trees or send flowers to the family in memory of Robert Eckard, please visit our flower store.