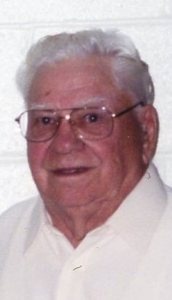 Stephen was preceded in death by his wife, Pearl Irene Watkins on July 28, 2004.  They were married for over 50 years. He was also preceded by his loving daughter with whom he resided for 7 years, Rose Mary (Watkins) Kelley, on July 13, 2011.

Stephen was born on December 22, 1920. He was the son of the late William Watkins and Mary Katherine (Bieletz) Watkins. He was also preceded in death by his four brothers; Richard, Ira, Frederick, and Karl Watkins and his only sister, Trennetta Winebrenner. Stephen was the youngest and last remaining member of his immediate family.

Stephen is survived by his sons: George Stephen Watkins and wife Rebecca, and Harold Joseph Watkins and wife Rhonda, all of Mt. Savage. He is also survived by his grandchildren: Sherri A. (Kelley) Getson and husband William, LaVale, Autumn M. Watkins, St. Petersburg, Fl, Andrew P. Watkins, Mt. Savage, and Daniel J. Watkins, Millersville, MD. Also surviving Stephen are his brother-in-law and sister-in-law on his wife’s side: William R. Pratt, Mt. Savage, and Alice L. Snyder, Frostburg. He is also survived by numerous nieces and nephews.

Stephen worked various jobs throughout his life. He worked at Ort’s Bakery, and the Allegany County Roads in the early 1950’s. He then worked for a short time at Winter Brother’s Coal Co. He retired from Frostburg State College in 1982 from the Maintenance Department.

Stephen was always a presence in the community. He was active in the Mt. Savage VFW, attended St. Patrick’s Church, Mt. Savage, and he just seemed to know everyone in town. He was an honorary member of the Mt. Savage Volunteer Fire Company. He went by many names. He was known as: Watsie, Valentine, Steve, Smiley, Hon, Pap, and of course, Dad.

As a veteran of World War II, Stephen served his country in the United States Army. He was a member of the Mt. Savage VFW Honor Guard for many years, serving to help honor his fallen military brothers, While in WWII, he was stationed in India and Burma. While he didn’t speak often of his time in the military, he was always very proud of his country and his service.

A funeral service will be held at the funeral home on Tuesday, October 15, 2013 at 10 am with Fr. Bernard Finerty, OFM Cap. as celebrant.

Interment will be in St. Patrick Cemetery in Mt. Savage.

To order memorial trees or send flowers to the family in memory of Stephen Watkins, please visit our flower store.