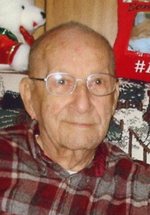 William retired from Wilson Hardware and formerly worked at City Furniture Co. He was Catholic by faith.

To order memorial trees or send flowers to the family in memory of William Martin Sr., please visit our flower store.